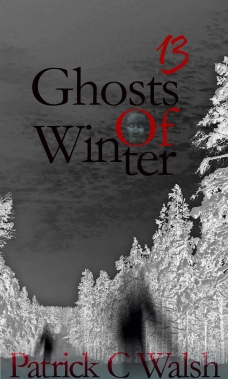 My latest book 13 Ghosts of Winter was a new departure for me. My previous books were all detective stories featuring the same character Mac Maguire. So why such a change of direction from crime novels to a book containing thirteen original tales of the supernatural?

I’ve always loved ghost stories ever since I’ve been young and I pretty much read everything that was even remotely supernatural that our local library held by the time I was eleven. There’s a bit in my detective novel The Dead Squirrel where Mac goes into a library for the first time in quite a while and the smell of the books brings back memories –

‘It immediately brought him back in time to the red-bricked Victorian palace of a library he’d almost lived in when he was young. Ghost stories had been his favourite back then. He remembered reading them aloud to his friends by a flickering candle in the gang’s hideout, in reality his father’s garden shed, and nearly scaring each other to death.’

This is exactly what my little gang of friends used to do. I was also blessed with an uncle who was Irish and who could tell ghost stories that would curdle your blood. On dark winter nights, in a room lit only by candlelight, his soft words would weave a ghostly web that would have the hairs on the back of my neck standing up.

A little later in life I discovered the books of M. R. James. Whistle and I’ll Come to You My Lad was the first I read and it’s still one of my all time favourites. James doesn’t rely on the written equivalent of jump scares to frighten his readers instead, through the delicacy of his writing, he lures his readers into a dark world where hideous things are rarely seen but are always felt to be just around the corner. He doesn’t have to spell it out but allows his readers’ imaginations to do it instead.

When my niece and nephew were quite young they used to beg me to tell them ghost stories which I sometimes had to make up on the spot. I’d almost forgotten about this until I met up with them late last year. They were talking about my books when my nephew asked me why I’d never written any ghost stories. I didn’t have any answer to that, in fact I wondered why myself. I therefore resolved to write a book of short ghost stories and the number thirteen seemed appropriate. I wanted to publish them in time for Christmas as I’ve always loved reading ghost stories around that time of year and especially, of course, the greatest of them all A Christmas Carol.

It was a bit of a stiffer challenge than I’d thought but by burning the midnight oil I managed to get the book published a week before Christmas Day. While it was quite a struggle I must admit that I also enjoyed it immensely and it provided me with a change of pace from the crime novels.

I’m currently back working on the fifth Mac Maguire book, provisionally entitled 23 Cold Cases, but I’ve also started on a supernatural thriller called The Black Vaults Experiment. I’m hoping to write the two in tandem that way if I run out of ideas for one I will always have the other one to fall back on.

(Original illustration above by the great John Leech)