The eagle eyed amongst you will have noticed that the cover of The Body in the Boot has recently changed, not once but twice. This is why.

This is the original cover and it was one I quite liked. It’s the first book in the series and therefore I’m anxious to advertise it as much as possible on the grounds that if a reader likes it then they might read the other eight.

I told the designer that I wanted something that suggested film noir, those lovely old crime movies from the forties and fifties and I think he did a good job. So what’s the problem then? Well, Amazon have now made it easier for me to get my books featured on the Kindle lockscreen and it’s an advertising opportunity that I felt I couldn’t miss out on. Unfortunately Amazon also have a myriad of rules around what qualifies for a lockscreen ad and 3D lettering in the title is something that they don’t like for some reason. I have the original file but it’s a Photoshop file and, as I’m not proficient on Photoshop, I decided to try making another cover. 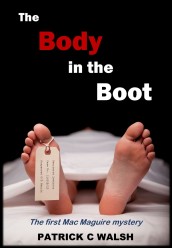 This was the cover I came up with. It’s simple and perhaps a little brutal but it depicts one of the characters, Hetty Lewinton, in a crucial scene near the beginning of the book. I also liked that the toe tag was blank which meant that I could put some text in there that would help to personalise the image a bit.

Of course Amazon didn’t like it. It has rules about gore and dead bodies in its ads so, after paying the princely sum of £8.40 for the image, I found that I couldn’t use it. Oh well at least I can put it towards my tax.

This was the cover I finally came up with. Now, before you say anything, it is a little generic perhaps but it also shows a scene from early on in the book as Mac walks down the corridor towards the morgue and the dissection room in which Hetty Lewinton is going to get cut up in. It shows the figure of a man and, in his left hand, there’s a crutch. I’ve squashed the figure down a bit to suggest that he’s got a bit of weight on and I’m hoping that the figure’s body language suggests some hesitancy as well. This is the first time that Mac has worked since the death of his wife and his forced retirement from the police force and he has major doubts as to whether he’ll be up to doing the job anymore. We find out during the course of the book that, thankfully, his fears were unfounded.

Anyway I’m hoping that Amazon might finally see their way to letting me advertise this. If not I’ll update this post and let you know exactly what they didn’t like about it.

If you’ve got any thoughts on the covers above then please let me know.

PS It’s now the 9th November and I’ve decided to forgo the ads and go back to the original cover. I discovered that it didn’t feel like ‘The Body in the Boot’ without it. The trouble with covers…